Entering the game at the age of six, Jamie played in his first tournament when he was 10 with the San Diego Jr Golf Association and at 14 was ranked as the SDJGA Player of the year for his age division. As a 4 year letterman at La Costa Canyon High School he tied a CIF record for lowest 9 hole score in a match (30). He went on to San Diego State University’s Golf Team and during that time won the San Diego City Amateur Championship 4 years in a row (2005, 2006, 2007, & 2008).

Jamie began teaching in 2010 with the Aviara Golf Academy and studied over a thousand hours under Kip and the instructors to build a full background in their teaching methods and philosophies. Through all of 2011 & 2012, he was a full time instructor at The Singapore Island Country Club; one of the worlds largest golf clubs. He was active in teaching players of all ages and skill levels; from young beginners, recreational players, competitive teenagers, national team players and club champions. As a corunner of the club’s Jr Premier Team & Talent Identification Program, he helped the juniors in understanding course management, building a competitive mindset, and developing their short games. Two of his notable junior students lowered their handicaps from a 16 to a 3, and from 20 to 5.

Jamie’s approach to teaching has been influenced by his father Kip and all of the instructors at the Aviara Golf Academy, his competitive background, and his own research in all aspects of the game through film. He wants his players to learn and develop their games from the most simple approach possible. Quoting his favorite player, Bobby Jones “even the most earnest teaching professional presents the game to his pupil as a far more difficult thing than it really is. It is equally obvious that what the game needs most if it is to continue to grow in popularity is a simplification of teaching routines which will present a less formidable aspect to the beginner, and offer the average player a rosier prospect of improvement.” 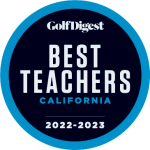